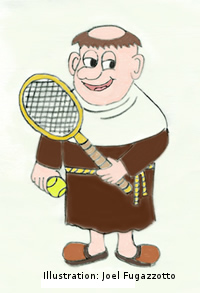 The site was purchased by the Dominican Fathers in the late 1930s to operate a novitiate. In 1947, older buildings on the site were replaced with a small monastery, which is called a priory. Over the years, being good neighbors, the Dominicans shared the use of the tennis courts with the surrounding residents, who affectionately referred to it as The Priory. However, as interest in religion as a way of life diminished by the late 1970s, the Fathers decided to sell the property. Wanting to keep the property for recreational use, a group of neighbors raised enough money to purchase it. Two acres were sold off for six residences, and the remaining acreage was set aside for what is now “The Priory.”